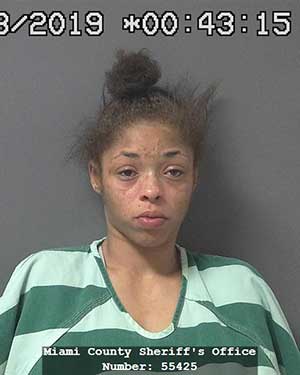 Bunker Hill, IN – An Elkhart woman is facing charges of Trafficking w/inmate, Dealing Sch. I, II, or III Controlled Substance, and False Identity Statement following her arrest at the Miami Correctional Facility on Sunday, March 24, 2019.

According to a press release from the facility, Miami Correctional Facility (MCF) Office of Investigations and Intelligence (OII) was contacted by facility staff on Sunday regarding an attempted trafficking incident during an offender visit. Anttrianna Stokes, had arrived at the facility at approximately 4:00 p.m. to visit Offender Stevonta Hill DOC# 266117. According to the release, Ms. Stokes was in possession of a Snickers bar containing 418 Suboxone strips.

MCF Warden William Hyatte confirmed the arrest of Anttrianna Stokes of Elkhart. “I could not be prouder of the visitation staff that found the contraband and alerted Investigations staff. This teamwork is the strong foundation in ensuring the safety and security at the facility”.

Ms. Stokes entered the facility by presenting an Illinois driver’s license with a false name. At approximately 4:40 p.m., Stokes handed visitation staff members multiple foot items to be inspected by them and given to Hill to take back to his cell. While inspecting the food items, Staff noticed a Snickers Bar with “abnormal physical characteristics.” Upon further inspection of the bar, staff discovered several bundles of orange colored substances wrapped in plastic inside.

According to his probable cause report, IDOC Police Officer Matthew Bishir took possession of the items and identified them as Suboxone (Buprenorphine), a schedule III controlled substance.

While transported Ms. Stokes to the Miami County Jail, she informed Officer Bishir of her true identity.

Ms. Stokes was booked in for Trafficking with an Inmate, a Level 5 Felony; Dealing in a Schedule I, II, or III Substance, a Level 3 Felony; and, False Identity Statement, a Class A Misdemeanor.

Offender Stevonta Hill’s role in the attempted trafficking is under internal investigation. Hill has been incarcerated at MCF since October 2017.

All Criminal suspects are presumed innocent until proven guilty in a court of law.