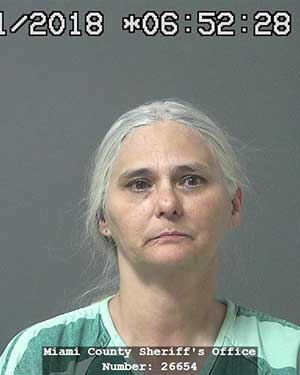 BUNKER HILL, IN – Yesterday Correctional Police, Investigations and Intelligence, and custody staff were crucial in the arrest of Aramark employee at Miami Correctional Facility (MCF).

Ms. Kelly Edwards was stopped coming in the back gate and questioned about a Styrofoam container. When she was removing the bread from the container a vacuumed sealed package which appeared to have loose tobacco and a pack of cigarettes was visible. MCF Correctional Police Officers took possession of the container's contents. Ms. Edwards was taken to an interview room where she agreed to be interviewed. She was read her Miranda Rights and then admitted to trafficking with an offender in exchange for money.

She was arrested and taken to Miami County Jail for Trafficking with an Inmate (Level 5 Felony). Ms. Edward is considered innocent until proven guilty in a court of law.

Per Warden Hyatte on the arrest, “I am proud of the persistence the investigations and custody staff have displayed. Contraband interdiction is a top priority in the facility.”