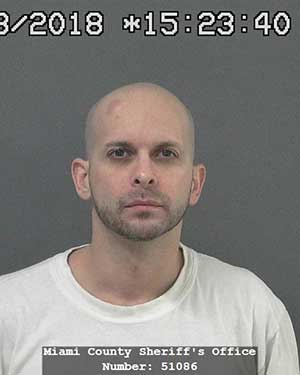 Bunker Hill, IN – A Kokomo man faces charges of Conspiracy to Commit Trafficking W/Inmates following an investigation by the Indiana Department Of Correction. The investigation began with the arrest of Correctional Officer Talleigha Titus on June 29, 2018, at the facility. You can read our coverage of that arrest by clicking HERE.

According to a probable cause affidavit filed with the Miami County Prosecutor's Office, On June 29, 2018, at approximately 5:30 a.m., Correctional Officer Titus attempted to smuggle two packages to an inmate at the Miami Correctional Facility. She was stopped by Correctional Police Officer L. Harbaugh and admitted she had two packages that she agreed to smuggle inside the facility for $1,000. Inside those packages were fourteen (14) suboxone strips and over 28 grams of methamphetamine.

Titus told Officer Harbaugh that the packages had been placed in her truck the night before by someone the inmate had “hooked up with her.” Titus reported that she never spoke with the subject who delivered the drugs and that all communication with that person was via text messages.

The facility had monitored several three-way telephone calls between the inmate who was to receive the drugs and Jason Jones, a former offender who had been housed at the Miami Correctional Facility. Those phone calls detailed the plan for Jones to deliver the drugs to a third party for delivery to the inmate.

On July 13, 2018, Correctional Police Officer Harbaugh went to the Howard County Jail to interview Jason Jones regarding his part of the trafficking case. Mr. Jones gave a full confession after being read his Miranda Rights. According to the probable cause affidavit, Jones acknowledged the calls he received the MCF inmate. He stated that on June 28, 2018, he went to a trailer park “somewhere over by Grissom Air Force base” and put two packages (both identified by a photo) in the back of a truck. In his interview with Harbaugh, he stated he felt pressured by the inmate and was afraid of him, however in the calls that were monitored by the facility, Jones seemed to be a willing participant.

Based off of this information, a Warrant for the arrest of Jason Jones, 38 of Kokomo, IN was obtained. He was arrested by the Miami County Sheriff’s Department on August 20, 2018, on the warrant.

It is not known at this time if the Miami Correctional Facility Inmate who was to receive the drugs will face additional charges.