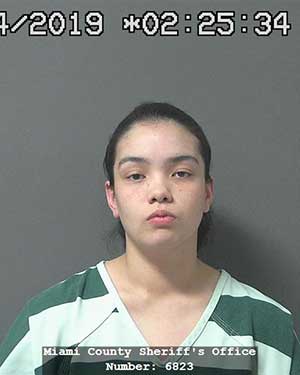 Peru, IN – Jessica Willis, 23 of Peru is facing a charge of Habitual Traffic Violator after her arrest on Saturday, April 20, 2019, at approximately 1:20 a.m.

According to an Indiana State Police Report of Arrest, Ms. Willis was observed driving a blue 2000 Jeep Wrangler at the intersection of Main Street and Miami Street by Indiana State Trooper Andrew Baldwin.

Trooper Baldwin utilized his in-car computer and conducted a BMV check on the Jeep and it returned to Ms. Willis whose driving status was listed as Habitual Traffic Violator.

Trooper Baldwin then conducted a traffic stop on the Jeep in the PNC Bank parking lot. Ms. Willis produced a state ID card when asked for her license. Willis reported that she was coming from work to drop off the deposit and was then headed home.

Trooper Baldwin then confirmed her status as a Habitual Traffic Violator. She was then placed under arrest for Felony HTV.

Her vehicle was secured in the bank parking lot and she was then transported to the Miami County Jail.