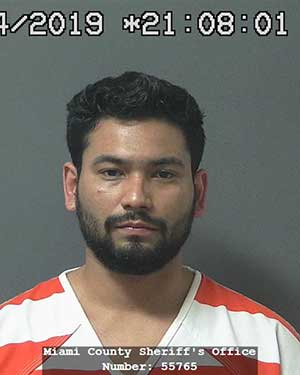 Miami County, IN – A South Bend man is facing charges of Operating While Intoxicated-Refusal, Reckless Driving and Possession of Cocaine after a being stopped for driving 106 miles per hour on US Route 31 at CR 550 N. in Miami County on April 13, 2019, at approximately 6:50 p.m.

According to an Indiana State Police Report of Arrest, ISP Trooper Andrew C. Baldwin of the Peru Post was patrolling northbound on US 31 at 550 North in Miami County when he observed a silver Ford Focus passenger car in the passing lane of Southbound US Route 31 at a high rate of speed.

Trooper Baldwin entered the crossover and gave chase to the Ford catching the vehicle on US Route 31 at CR 300 N. and conducting a traffic stop.

Upon approaching the vehicle, Trooper Baldwin observed a male driver and a female passenger. The driver produced an Indiana ID card that identified him as Henry J. Sevilla, 27 of South Bend, IN. Sevilla responded very nervously when informed of the reason for the stop and explained that he didn’t realize his speed and stated he was in a hurry to get his passenger, whose name was redacted from the report by the Miami County Prosecutor’s Office to the airport.

While speaking with Mr. Sevilla, Trooper Baldwin detected the odor commonly associated with an alcoholic beverage coming from within the vehicle. He also observed Mr. Sevilla to have bloodshot eyes. He then asked Mr. Sevilla how much he had to drink. Sevilla denied having anything but claimed his passenger had been drinking prior to his picking her up.

After conducting a check on the vehicle and driver’s license, Trooper Baldwin returned to the Ford and asked Mr. Sevilla to participate in Standardized Field Sobriety Tests. Sevilla agreed. When he exited the vehicle, Trooper Baldwin smelled the odor of alcoholic beverages coming from his breath.

He was then given a preliminary breath test with a result of .119% BrAC. At this point, Mr. Sevilla was placed in handcuffs and read Indiana Implied Consent. He verbally consented to a certified test and was placed in Trooper Baldwin’s vehicle for transport.

The female also was given a portable breath test with a result of .13%. She did not possess a valid driver’s license. She was transported by Miami County Deputy Howard to the gas station at US Route 31 and 100 N. in Miami County.

Sevilla was then transported to the Miami County Jail. At 7:46 p.m. he was given a certified breath test with a result of .114 grams of alcohol per 210 liters of breath.

As Mr. Sevilla was being booked into the jail, Deputy Arthur located a baggier of a white powder substance in Mr. Sevilla’s crotch area. The substance would later test positive for cocaine and weighed approximately 2 grams.

Henry Sevilla, 27, of South Bend, IN faces charges of Operating While Intoxicated, Reckless Driving, and Possession of Cocaine.

All criminal suspects are presumed innocent unit proven guilty in a court of law.