Welfare Check Results In Drug Charges Against Man and Woman 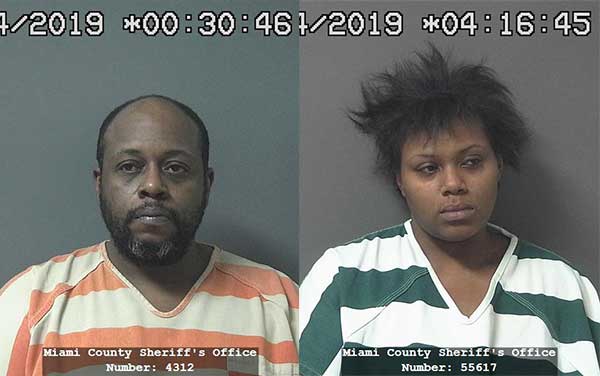 Peru, IN – Peru Police Officers conducting a welfare check on a two-month-old baby led to the arrest of a man and woman on drug charges on Thursday, April 4, 2019, at approximately 10:23 p.m.

According to a probable cause affidavit, Peru Police Officer Brok Westfall was assisting Officer Russ Tussey on a welfare check of a two-month-old baby. That investigation led them to an address that the Miami County Prosecutor’s Office redacted from the report. Once at that address, Officers detected the odor of marijuana.

Officers advised the homeowner that they were looking for a subject whose name was redacted from the report by the Miami County Prosecutor’s Office, to ask her questions about her child. The homeowner advised the subject was present at the residence.

Officer Westfall then went to the bedroom to have those individuals come to the living room. Once he entered the bedroom, he observed a male subject he knew to be Troy A. Sowell, 42, of Kokomo, IN. Mr. Sowell was known to have an active warrant through Miami County. Another male subject whose name was redacted from the report by the Miami County Prosecutor’s Office and a female by the name of Markeysha G. Spells, 31, Homeless were also seated in the room.

While placing Mr. Sowell in handcuffs, Officer Westfall noted a small trash can, directly in front of Mr. Sowell. In plain view in this trash can was a plastic bag containing a green leafy plant-like substance that would later test positive for marijuana and weight approximately 7.4 grams. Also located in the trash was a bag that contained a crystal rock-like substance that would later test positive for methamphetamine and weight approximately 13.6 grams.

All subjects were then escorted to the living room. The items in the trash can were then secured and PPD Detective Grant was contacted.

Detective Grant then had one of the subjects whose names was redacted from the report step out into the hallway. This subject signed a consent to search form for the bedroom. The subject freely stated that she had marijuana in her bedroom.

A search of the bedroom was then conducted by Officer Westfall. Items located in the bedroom included: A plastic contained in the left-hand side nightstand that contained a plastic bag that held a green leafy plant-like substance that would later test positive for marijuana and weighed 9.5 grams, a box with a small silver grinder and other items of paraphernalia.

A glass smoking device with a white residue was located in the right-side nightstand. The subject stated that this item was not hers as all she does is smoke marijuana.

There were also several more items of paraphernalia located throughout the bedroom along with several more empty plastic bags. These items were collected and secured in Officer Westfall’s Police vehicle.

Once back at the Peru Police Department, Detective Grant interviewed all three subjects. Markeysah Spells advised that she brought Troy Sowell the items located in the trash can.

Troy Sowell, 42 of Kokomo was transported to the Miami County jail on charges of Possession of Methamphetamine, Possession of Marijuana as well as his warrant.