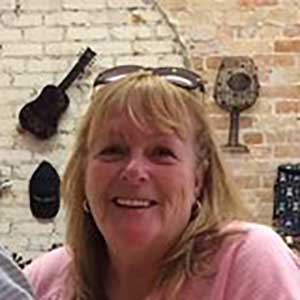 I was about nine. Awkward. Not very pretty. Not good at things, not that anything held my interest for very long. We spent Thanksgiving with Great-aunt Gladys that year. She sewed the most beautiful things (notably clothes that just fit my Tiny Tears doll) and I told her I’d like to sew, too, but my mother wouldn’t let me learn on the old treadle machine until I’d accomplished something by hand.

So Great-aunt Gladys sent me — me, who never got mail addressed to me unless it was my birthday — a couple of yards of green cotton print, some white rickrack, and a pattern for an apron. Since my mother wore aprons all the time, I’m pretty sure everyone thought I’d give the whole project up anyway and Mom would get a new apron out of it and the fabric wouldn’t be wasted.

Night after night, I stitched. I gathered, I hemmed, I added rickrack. And added it. And added it. I finished the apron. It was hideous, and I never wore aprons anyway. Did I mention I was nine? So I gave Mom the apron and she said, yes, I could learn to sew on the machine, but I didn’t want to anymore. I was sick of sewing.

When I was in the seventh grade, home economics was a required course — remember that? It was half cooking and half sewing and it only took me a couple of weeks to figure out I wasn’t meant to be either a chef or a seamstress. The food I cooked in class was raw in the middle and charred on the outside and the skirt I sewed was … God, it was awful. It had so many gathers in the back and so few in the front that the entire garment looked bustled. Not a good look for 1962. Did I mention I wasn’t good at crafting?

I had this sister-in-law, Sadie — actually, I still have her; I’m convinced my brother married her just for me. Did I mention I’m the youngest? One year during Dollar Days, a huge Midwestern going-back-to-school event at which you could buy fabric, socks, and underwear really cheap, Sadie said, “Why don’t we make some dresses?” Shifts were popular then. They were easy to make, so we did. I used Sadie’s sewing machine with a knee press control and it was a lot of fun. Wonder of wonders, I was pretty good at it, too. But then shifts and sewing went out of style and I got more interested in the Beatles and other boys and I didn’t sew anymore.

I grew up a child of the 60s, complete with a peace sign on a chain around my neck and folk songs echoing through my heart. I wanted a husband and children, to write books, and to help people.

I had this daughter in 1972 — actually, I still have her, too. She was little and cute and so much fun to sew for that I spent years making her things. The year she was four, her dad stayed up with me on Christmas Eve until two A.M. while I made her a long Holly Hobbie dress on my horrendous old sewing machine. We drank coffee and laughed while I sewed and he assembled toys. At one point, when I was in tears because I was so tired from fighting with my sewing machine, he said, “Let me help you. You can open that big present under the tree.”

But I wouldn’t. I finished the dress and it was beautiful and so was she. So was the new sewing machine I unwrapped on Christmas morning. Yes, I still have the man who gave it to me, too. Did I mention a husband and children?

Twenty years later, I gave my daughter that sewing machine when I bought a new one. I used the new one sometimes, made a garment here and there, but not a lot. I had teenagers and a husband, a job and a house. I wrote stories on lined yellow paper and dreamed of being a writer. I didn’t care about sewing.

In 1994, my daughter and her boyfriend called. They were engaged. Wasn’t it wonderful? Would I make her wedding dress? And dresses for the three bridesmaids and the two flower girls? “Of course,” I said, and from March until midnight of the day before their August wedding, I sat in the kitchen and sewed, cursed, and cried in turn.

Oh, they were gorgeous. Not the dresses so much as the girls in them. Did I mention that I wasn’t very pretty? Well, I still wasn’t, but oh, the beauty I’d created with the sewing machine and serger that spent all those months on the kitchen table. Twenty-five years later, I can still see the picture of them in my mind.

So I sewed for a few years. Nieces’ weddings. Granddaughters’ dresses. Grandsons’ boxer shorts and pajamas. It was fun, but I had a job to do, books to write, bathrooms to clean. Who had time to pore over bolts of fabric and sweep up errant straight pins?

I was at a meeting when another member showed a quilt she’d made from Kaye Wood’s Six-Hour Quilt pattern. They were fast and pretty and my friend gave them to the children’s hospital. Gowns, too. You could whip them up in a half hour out of soft, child-friendly fabric. Oh, and turbans for cancer patients who had lost their hair. They took no time, and they helped people.

Did I mention I wanted to help people?

I turned half of my office into a sewing room — which sounds very neat, but in truth you could scarcely walk through it — and then I sewed quilts and hospital gowns and long Pioneer Day dresses for little girls who might not have them otherwise.

Even now, when writing (and, admittedly, doing other things I want) takes up most of my available time, I spend hours comparing colors and textures in fabric shops and buying from the clearance bolts at Walmart. I’m a sucker for the thread rack — all those colors!—and the notions wall. I have enough scissors that I wonder if I should have some kind of weapons license for them, and there hasn’t been a sewing show created for television yet that I don’t like. I love sewing machines as much as I do computers, but thankfully they do not become obsolete when next year’s model comes out.

Sewing is an avocation that gives a surprising amount of sensate pleasure. The aroma of a fabric store or department, a combination of sizing and fibers, is like the scent of spring — it makes a stitcher happy, gives her energy, and opens her wallet. I’m always surprised when I buy fabric that it’s not soiled from the oils of exploratory fingers. Because those of us who sew never just look at the material we use. We touch it, sniff it, pull out the bolt and lay it up against another to give it a critical eye. We talk across the bolts to each other.

“It’ll look great till you wash it and that white border turns pink.”

“The pattern calls for two yards but if you lay it the other way, you only need half that.”

“It may be in the home dec department, but it’d make a great shirt.”

“So what if it’s ugly? It’s a buck a yard and it won’t look half bad with this blue.”

When I look back — no matter how many times I’ve stopped doing it — sewing has been a constant for most of my life. The treadle machine I begged to use 50 years ago still sits in my hallway. I hated sewing on it, but I love the fact that I still have it. A Holly Hobbie dress moved from my bottom drawer to lie casually across an antique ironing board in my daughter’s house. Her wedding dress hangs in the spare room closet. I remember Great-aunt Gladys sometimes, and am grateful once again for the package that came in the mail that day and the memory bank in which she opened such an expansive account for me.

Occasionally, I turn on an old movie and while away the afternoon assembling a quilt for a child who needs warmth. I hope she enjoys it. Because, whether you do it every day or once a year, sewing is all about warmth and enjoyment and making memories. It’s love in every stitch.