Tech Talk with Talova Communications for 12/26/18 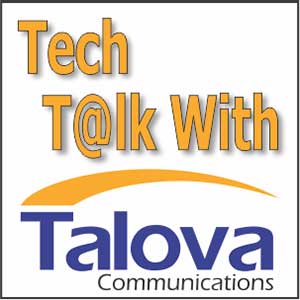 Sometimes our wireless internet connection just doesn’t have the range it seems it should. Last week we discussed how we could get more range by trading off speed. This week, we will look at ways to extend your range, while keeping a similar speed, by using Wi-Fi range extenders.

When you go looking to extend your Wi-Fi, you will see things that seem like they all do similar things, but they are called different things. Well, you would be right. A range extender, a booster, and a repeater all serve to make your wireless signal extend further from the main router. The difference isn’t always in the name though. Often the difference is in the way they work.

There are a few different ways that you can extend your Wi-Fi. One of the most common ways is to repeat the signal exactly as it is received from the main router, using the same internal radio. This has some advantages and disadvantages. There are two main advantages to this. One advantage is that you don’t have to change the settings on your devices. Because the SSID, the name of the device you connect to, is the same between the main router and the extender, all you have to do is connect, and your device will choose the strongest signal. The other advantage is that these devices are cheap. Because they only use a single radio and are fairly simple technology, they can be produced very cheaply. You can find them for less than $15 delivered, and even less than $10 if you really look. One disadvantage is that unless you totally lose the signal from the main router, you will likely have to disconnect from your Wi-Fi and reconnect in order to take advantage of the extender. For devices that stay in the same room at all times, this should never be a problem. For cell phones, tablets, laptops, or other devices that might move around, this could be annoying, but not as annoying as having no internet at all. Another disadvantage is that your speed is cut in half. Because you are using a single radio, it must transmit and receive everything it gets using the same radio. That means that half its time is spent sending and receiving from and to your device, and the other half of its time is spent sending and receiving to the router. It may seem like since the Wi-Fi speed is more than double the internet speed that it shouldn’t be a problem, but it has to wait for the packets to be sent and received by the slowest point before it can rebroadcast, so you are stuck at half the speed of your internet. This is often a deal killer, but if you’re just a light internet user in the area this kind of extender covers, it may be a cheap fix for your problems.

Another way to extend your Wi-Fi is to use a Wi-Fi extender that uses multiple radios. They will send and receive to the router using one of the bands, 2.4Ghz or 5Ghz, and they will use the other band to communicate with the device. These devices can be found from around $60 on up to near $200. This defeats much of the benefits of a wireless AC router, as you can’t take advantage of 80Mhz channels with higher bandwidth, since 2.4Ghz doesn’t have 80Mhz channels available, but it is not likely that you need gigabit speeds anyway. On the other hand, since it isn’t using the same radio to communicate with both the router and the device, it is able to transfer at full speed for the channel width available, which is usually around 750mbps, which is more than fast enough for most internet connections.

The final method of transmission you can use is through the power lines in the house. This offers the fastest internet with the lowest latency but sometimes isn’t viable, depending on how the house is wired. These range from around $70 to $150.

How this wire-line method works is that a device is placed near the router and connected directly to it. It is then plugged in directly to the power outlet. You then take another extension device and place it in the area you need to extend Wi-Fi to. The data between the extender and the router is transmitted through the power lines, instead of a radio, so it is quite fast. You can also take advantage of all features of wireless AC, such as 80Mhz channels, so you will also benefit from full speed if you buy the right one. Overall, if you have no other way of getting signal to an area, and you don’t have issues that keep it from working with your wiring, this is probably the best method of extending your wi-fi network.

Sometimes, you need to extend your network outside your home. I hesitated to mention this since it is not a normal case, but it still does exist, and there is a solution, so I figure I had better address it.

There are devices that can allow you to extend your Wi-Fi quite a distance. If you have an unlimited budget, you can wirelessly connect to another structure miles away. On a modest budget though, you can get a device that will make your network available outside your home in a radius of up to several hundred feet. These devices are usually used commercially by terrestrial wireless internet providers, and they have them at rather inexpensive price points. Here in Peru, they use these devices to allow people to access the internet for free in the downtown area. You will see some rather inexpensive ones connected to some of the traffic lights, about 8 feet up the pole.

These devices have multiple different names, but you can find them by searching for outdoor Wi-Fi access points. They average around $90 and are fairly simple to set up. You connect one end to your router through an ethernet cable and just place them in a way that you will hopefully get a line of sight view of them from your devices.

This is a difficult thing to make a recommendation on since it all depends on your wants and needs, but overall, I would suggest the wire-line devices first, as they tend to be a little more reliable and have the fastest speeds of all the indoor devices. I use one of these devices at my home, where I need to extend the network from downstairs to upstairs, and it works great. If there is ever an issue, it is at the router, and not the extender. The one I have is proprietary and connects to Netgear’s Nighthawk routers, but there are some that are not proprietary and work just as well. I would recommend the Netgear PLW1000-100NAS. It is the fastest I have seen and works great.

My second suggestion for indoor use would be the devices with multiple radios. I use the Netgear AC1200 at my shop, and it works great and is only around $80 right now on Amazon. I occasionally have to cycle the power on it, because as with most consumer wireless devices, it gets an attitude sometimes and needs to be shown who is boss. Usually, I go for months without an issue, but then I’ll sometimes have to reset it every few days for a week or two. I wish this were just a defective design, but that’s a very common thing with consumer wireless equipment, no matter who makes it. Just realize that if you have a problem with your network when you are using one of these devices, it is likely the extender. If that doesn’t fix it, then check the main router.

For the cheap signal boosters with a single radio, I have no recommendation other than try to use one of the other methods if you can at all afford it. You will be much happier in the long run. The single radio units are just frustrating to use.

With the outdoor extenders, it’s kind of a no-brainer these days. There is one company that has dominated the outdoor wireless market for the last several years, and that is Ubiquiti. They use off the shelf components to build their devices, which makes them less expensive, but they are also very reliable and easy to set up. The Ubqiuiti UAP-AC-M-US is the one I would recommend right now. They are around $90, but they will really boost your signal around your house, and you won’t have to worry about buying extra stuff to get them to work. Everything you need, other than a place to mount it, is included.

I hope this helps you understand your choices when it comes to extending your wireless network.